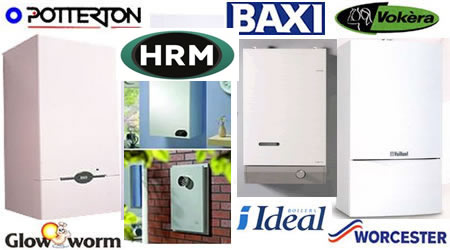 Discount Central Heating Boilers available online with free delivery to most of the UK.

Todays boilers are not only smaller, neater, and so take up less space, but they are more energy efficient and use less fuel to produce the same amount of heat. Replacing a 15 year old boiler with a modern highly efficient model, could save you upto 30% on your existing fuel bills. There are four main types of modern boilers using gas, LPG (Liquefied Petroleum Gas) or oil:

By converting approximately 88% of fuel into heat compared to 72%+ for a new conventional boiler, the condensing boiler is the most efficient of them all, wasting the least energy. Condensing boilers are available as both conventional or combination units. A conventional boiler burns fuel in a combustion chamber surrounded by a water jacket. This heats the water, which is then circulated around the heating system. Unfortunately, much of the heat produced by the burning of the fuel is either lost to the surrounding air or disappears up the flue. Condensing boilers basically scavenge the heat not recovered by the main heat exchanger and make effective use of it by reducing the temperature of the flue gases to a point where water vapour produced during combustion is "condensed out", releasing latent heat that would otherwise escape up the flue.

Combination boilers do the work of both a central heating boiler and a hot water cylinder and they are compact (usually wall hung in the kitchen) - which means you either have more space in your airing cupboard, or you don’t need one at all. Installation costs may be lower and fitting is often less disruptive than with a conventional boiler. However, because the hot water heats on demand it runs more slowly - which means it takes longer to run your bath. Combi boilers are popular in properties where space is limited because they negate the need for hot and cold water tanks.